Continuing this week’s hiking theme (Click here for my post about hiking Table Mountain!), another Cape Town central hike that you shouldn’t visit South Africa without doing, is Lion’s Head.

One of South Africa’s most popular hikes

Honestly probably about 60% easier than Table Mountain, it’s much more amateur hiker friendly and incredibly popular with tourists (not least because there’s no cable car option so you either hike it or you don’t do it at all). It is still, like a lot of mountain hikes, very, very steep in places and is quite famous for the section that involves pulling yourself up cliff faces using steel staples hammered into the rock, BUT it’s really not as scary as it sounds!

How long does Lions Head take? 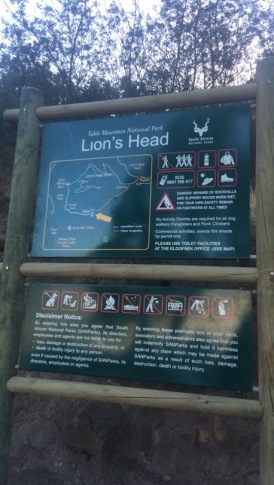 Lions Head is a great hike for any time of day, but it’s especially popular to do in the evening, timed perfectly so that you’re at the top for sunset. Timing is everything with this hike and I’d definitely recommend doing it earlier rather than later. The number of people reaching the summit AFTER the sunset had completely disappeared was such a shame! It takes around 1 hour to reach the top of Lions Head, I would recommend starting the hike probably an hour and 15 minutes before official sunset just to be safe! When we did this hike we took into account the fact that we had almost died going up Table Mountain the day before and so adjusted the pace to our aching legs accordingly!

Let’s start at the very beginning…

Similarly to Table Mountain, Lions Head is located very centrally for those staying in Cape Town. You can easily get an Uber to the trail head and start the hike from there. If you’re visiting South Africa in peak season (Jan/Feb) like I was then there will be a line of people snaking their way up the trail ahead of you. This is very helpful to avoid getting lost and also very helpful as an added safety measure for the aforementioned staples, but not so great for those artistic instagram shots (another reason to get to the top a little before you NEED to be there, get a good position for photos!).

The staples and chains

Seriously, not as scary as it sounds! Even for someone like me who is not at all the biggest fan of heights. If you really don’t fancy hauling yourself up vertical cliff faces, there are trails that avoid them although they take a little longer and may be considered not as “fun”! The constant stream of people actually became a kind of queue when we reached the staples and chains part, and although this was annoying it’s actually so much safer to attempt this part with a crowd of people around you ready to catch!

On top of the world!

Once we reached the top of Lions Head we became immediately jealous of those who were more prepared than us and had brought picnics with them! That’s definitely something I would recommend, although remember when packing that you’ll have to carry everything up the staples and chains!

The summit of Lions Head is quite big, definitely big enough for everyone who crowds up there to watch the sunset. Similarly again to Table Mountain, there are views all around Lions Head. One one side you have the beautiful sunset dipping into the sea and the other side another, impressive view of the city of Cape Town.

We found ourselves a comfy seat on some rocks and waited for the sun to dip completely down. We were happy to congratulate ourselves on another successful hike and even more happy that this one didn’t bring us as close to death as Table Mountain! 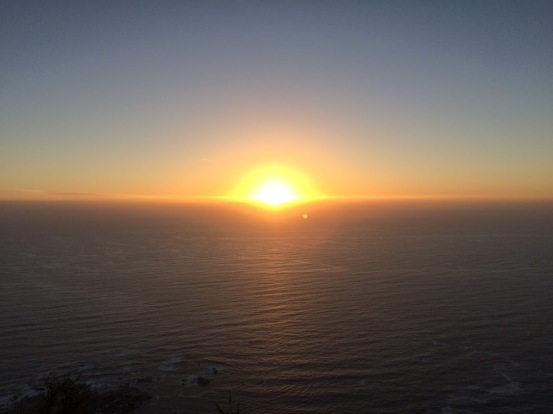 With the sun completely down and darkness setting in, it was imperative that we now retrace our steps as quickly (and safely) as possible in order to be through the staples and chains before proper night fall. TIP: Bring a torch! A head torch if you have one so that your hands are free tor the traversing the staples!

Despite nightfall rapidly approaching there’s always time to stop and admire one last view of Cape Town, with its lights guiding you back down from the mighty lion!

Check out my other South African adventure posts: