I grew up in the Lake District in the North of England, home to some of the UK’s highest mountains. You might think that this would make me an experienced hiker and mountain climber but I actually spent most of the 18 years that I lived in the Lake District avoiding the mountains at any cost! Now that I’ve grown up a bit and travelled as much as I have, I have developed a much greater appreciation for mountains and hiking and so when I found myself in Cape Town, South Africa, hiking up Table Mountain seemed like a great idea! (Emphasis on SEEMED…)

Table Mountain! (You know you can take the cable car right?)

Table Mountain is located centrally in the city of Cape Town and so is easily accessible for travellers without access to transport. The mountain and its accompanying view of the city are one of the most popular attractions for tourists visiting South Africa. To accommodate these tourists there has been a cable car to ferry people up the steep slopes since 1929. It costs less than €20 for a return trip on the modern cable car. Unless you are an experienced hiker, THIS is honestly the option I would recommend because, as you’re about to read, the hike it HARD!

Okay, so you decided to hike it…

If you do decide (like we did because we’re crazy) to opt for the hike rather than the cable car, you have a few of options for routes to the top: 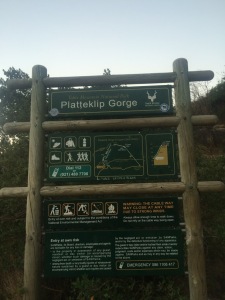 According to my old friend, Google, Platteklip Gorge is the “easiest” option for hiking to the summit and so, as  inexperienced, hungover (oops), unprepared hikers, this was our choice. We jumped in an Uber to the station for the Cable Car (and yet we STILL decided to hike?!) and set off on our walk from there.

It’s worth noting that I was in South Africa in January and February, the height of summer, and it was very hot. In hindsight, attempting this hike at midday was not the best idea we’ve ever had! Luckily, although requiring every ounce of physical strength both my best friend and I possessed, it required very little mental strength, the route being clearly signposted from the road, no maps required!

The beginning of the Platteklip Gorge hike is the easiest part in terms of gradient, but the hardest at midday in the beating sun as there is very little shade. Once you hit the actual gorge, the hike becomes very much like a large, winding set of never-ending stone stairs where there is a lot more shade but absolutely no rest for your burning leg muscles!

The water of life!

Platteklip Gorge is quite a short hike, mostly down to its ridiculously steep gradient! It took us just over two hours to reach the top and that included a LOT of water breaks (if you do this hike, take lots of water. Literally, take the amount you think you’ll need and then double it!). This route, due to being advertised as the “easiest” Table Mountain hike is also the most popular so there are likely to be quite a few other people suffering their way up with you! Nothing bonds strangers quite like equal pain and suffering deep in your muscles and lungs…

Back to the camera…

It’s hard to explain in words or photos how hard this hike is, or even how worth it it actually is in the end! By the time we reached the top, we felt like death personified. If you’e looking to take glamorous, instagram worthy photos at the summit then this hike is not for you. I’m always a fan of back-to-the-camera photos, but even more so this day with my bright red face and sweaty hair!

Table Mountain is of course famous for its table-top like summit which means if (IF) you survive the hike up the gorge then you have a large area to explore at the top. It’s quite commercialised at the top to accommodate the hundreds of tourists who take the cable car up the mountain but that’s actually very beneficial to exhausted hikers! There’s a great cafe at the top where you can buy a hot, filling lunch and free water refill stations available to make sure you have enough water for your epic hike back down! (If the hike up caused you to feel a little closer to death than you like, you CAN take the cable car back down! One way tickets are available at the summit for €10!) We made sure to walk thoroughly around the whole summit and enjoy the beautiful views across every angle of Cape Town. When the walk up almost kills you, it’s worth spending at least as long enjoying the victory at the top!

By the time we reached the top we felt as though it wasn’t possible to feel any more pain or exhaustion so we decided we may as well refuse defeat and just walk back down. This may have been the second mistake we made that day because the walk down was actually MORE painful than the walk up! But certainly a lot easier, not least because we knew it was more than half over and we were looking forward to our well deserved beers!

The only benefit of beginning the hike at 12midday was that on the way down we got to see the sunset! We were incredibly luck with the timing to see the sunset over Cape Town but not get trapped up the gorge in the darkness!

Eventually we made it back to the roadside cable car where we called an uber to take us officially back to ground level!

Overall, that crazy hard hike is something I’m incredibly glad I did. Since I conquered Table Mountain I have conquered other world-famous hikes that I’m not sure I would have had the courage to do that if I’d taken that cable car!

Climb a hill, they said. It’ll be fun, they said!

Check out my other South African adventures here: