If you google "Things to do in Cape Town", one of the top hits is always to visit the African penguins that reside on Boulders Beach. Of course, Boulders Beach is actually in Simonstown and not Cape Town at all… But how could anyone pass up on the chance to see wild penguins in Africa? Easily worth the day trip out!

Transport:
I was travelling through South Africa with a friend after finishing my work placement up in Johannesburg, (Once in Joburg shout out!) and we didn't have a car.
Because we didn't have a car our only real option for longer journeys was the train. We got an Uber (best thing ever, I used them ALL over SA) to the station and bought return tickets for the Southern Line to Simonstown.
The train takes around 1hr15min and because I panicked at the ticket buying window and said "whatever is cheapest!" we ended up with bargain basement tickets. There was, of course, a first class option but I'd always rather travel like a local…!

Simonstown:
When we arrived at Simonstown station, we found that Boulders Beach (the home of the penguins) was still about a 45 minute walk through town and down to the coast. The actual town of Simonstown is very pretty and I wish we'd had more time there. The walk to Boulders Beach was a straight line all the way through town and when we came out the other side there were plenty of signs directing us to the beach and its famous inhabitants. 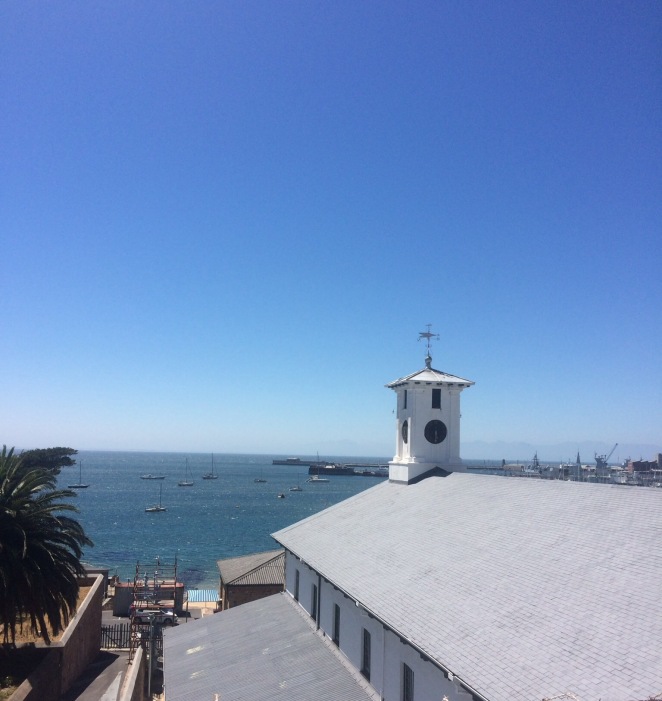 Boulders Beach:
After the car park, there is a ticket booth where we bought our entrance tickets onto the beach. Tickets cost R70 (€4.50) and although there's a few posts online about how you can avoid paying, I don't really have a problem donating €4 towards maintainece of the beach and the safety of such cute penguins!
The first beach the boardwalk lead us to was a very small area of sand surrounded by rocks but straight away, there they were: Penguins! They were much smaller than I thought and surrounded in some places by protective barriers. As with all wild animals, touching them is a very bad idea! However, they are actually incredibly friendly and will happily walk up very close to you in all areas of the beach.

The Boardwalk:
After spending a little time on the first beach we headed back up to the ticket booth and onto the boardwalk. This walk took us along the coast some way, with beautiful views out to sea. Eventually it leads to the Boulders Beach Visitor centre and cafe. There's another ticket control here and also HUGE queues from the bus loads of tourists that are dropped here everyday. The boardwalk then leads down to two more beaches where only penguins can go onto the sand and the people stay in the fenced areas of the walk. This is where the majority of penguins are but in my opinion wasn't nearly as fun as the first beach where we could get up close!

So, back to the first beach! There were plenty of penguins here to keep us entertained, along with a warmer sea than that on the shores of Cape Town and as long as the tide stays out, plenty of sand to relax on.

Then, just a quick sprint (?!) back to the train station to catch the final train back to Cape Town, taking with us lots of memories (and LOTS of photos) of one of Africa's most unusual and underrated animals.